The First World War is a period in history that for many years has been white washed when one thinks about how the war effort is reported or recorded in western history.  This perspective is that of major world powers that that in real terms did not reflect the African Diaspora as a war fought and supported by Black people.

For Britain with the First World War underway, the British War Office sought to recruiting soldiers from across the commonwealth, including the Caribbean and the British Protectorates in Africa. The British West Indies Regiment (BWIR) was formed in 1915 and in 1916 the South African Native Labour Corps was founded.  These soldiers were largely stationed in Europe, Middle East and Africa with noncombat tasks and ‘labour’ duties in roles such as digging trenches, building roads and working with munitions. The intricacy of the World War One was the colonial past of nations which brought soldiers from African and Caribbean into the fray who in relation to Great Britain were fighting for King and the ‘Mother Country’. The war meant crossing boundaries, bounders and integration changing the face of Britain and the rest of the Europe.

The picture of the 1910s is very different from a Black perspective, of how the world was both an opportunity and a threat in terms of a better life, a career and hope for the future whilst in another battle.

Although often forgotten or ignored, there has been a presence of people from the African and African Caribbean Diaspora in Britain since before records began.  In the early twentieth century, there were established Black communities in Liverpool, Bristol, Cardiff, Hull, Newcastle, Glasgow and London.

Members of the Black community took on active roles as artists, doctors, scholars and politicians. In the 1910s, London welcomed its first Black Mayor, when John Richard Archer was elected mayor of Battersea in 1913.  He later founded the African Progress Union (1918) working for “advanced African ideas in liberal education”, bringing together people from across Africa, the West Indies, British Guiana, Honduras and America. Members of the commonwealth and British Protectorates also sought support from colonial powers when campaigning for equal and civil rights.  Five delegates of the South African Native National Congress, arrived in Britain to provide a Black opinion of white South African rule, meeting with the colonial secretary in June 1914.  Sol Plaatje in particular made an impact on the Sunday Afternoon/Brotherhood Movement publishing a collection of Tswana proverbs in 1916 and addressing 305 meetings of the movement at the point of leaving England in 1917.

In 1916, Jamaican born pilot William ‘Robbie’ Robinson Clarke underwent pilot training in England and undertook reconnaissance operations over the Western Front in 1917, becoming the first Black British pilot. Discharged from the RAF in 1919, he received a payment of £60, a considerable amount, in addition to campaign medals and the Silver War Badge issued to those honourably release from military service due to wounds or illness.

By 1918, the estimated population of 20,000 Black people living in Britain, largely thought to be members of the armed forces from across the commonwealth. After the war ended, many stayed in Britain, by choice or by force (they could not afford passage home), but impact of their contribution provided a lasting legacy.

In the East Midlands, a small but flourishing community of Black pioneers were shaping local history in sport and arts.

The Countee Family from Leicester toured the music hall scene in the early 1900s and 1910s.  Charles William Countee, the son of an African American preacher who had settled in Leicester following his escape from slavery, was a musician and comedian.  Charles’ sisters Lucy, Mary Ann Amelia and Florence toured as singers. Charle’s wife Eliza and daughter Mabel, were also both singers touring throughout the 1910s as ‘The Two Countees.’

In local sporting history, Walter Tull was one of the first Black players in English football.  His father, from Barbados and English mother both died when he was a child and he was raised in an orphanage with his brother Edward (who was later adopted and became the first Black dentist to practice in Britain). Initially playing for amateur team Clapton FC, he was spotted by Tottenham Hotspur.  Considered to be the best forward on the field, he was kept largely in reserves due to facing racial abuse. In 1911, Herbert Chapman signed Walter Tull to Northampton Town where he went on to play 111 games for the club.

On 21 December 1914 Walter Tull enlisted with the seventeenth Middlesex Regiment, part of the ‘Footballers Battalion’ with professional players from across the UK.  He rose to the rank of lance sergeant and fought in the Battle of the Somme in 1916. Walter Tull was commissioned as a second lieutenant on 30 May 1917, becoming the first Black infantry office in the British Army, at a time when Military Law excluded soldiers that were not of European descent from becoming commissioned officers. He served on the Italian Front from November 1917 to March 1918 where he was commended for his gallantry. On 8 March 1918 Walter Tull was killed in action near the village of Favreuil. 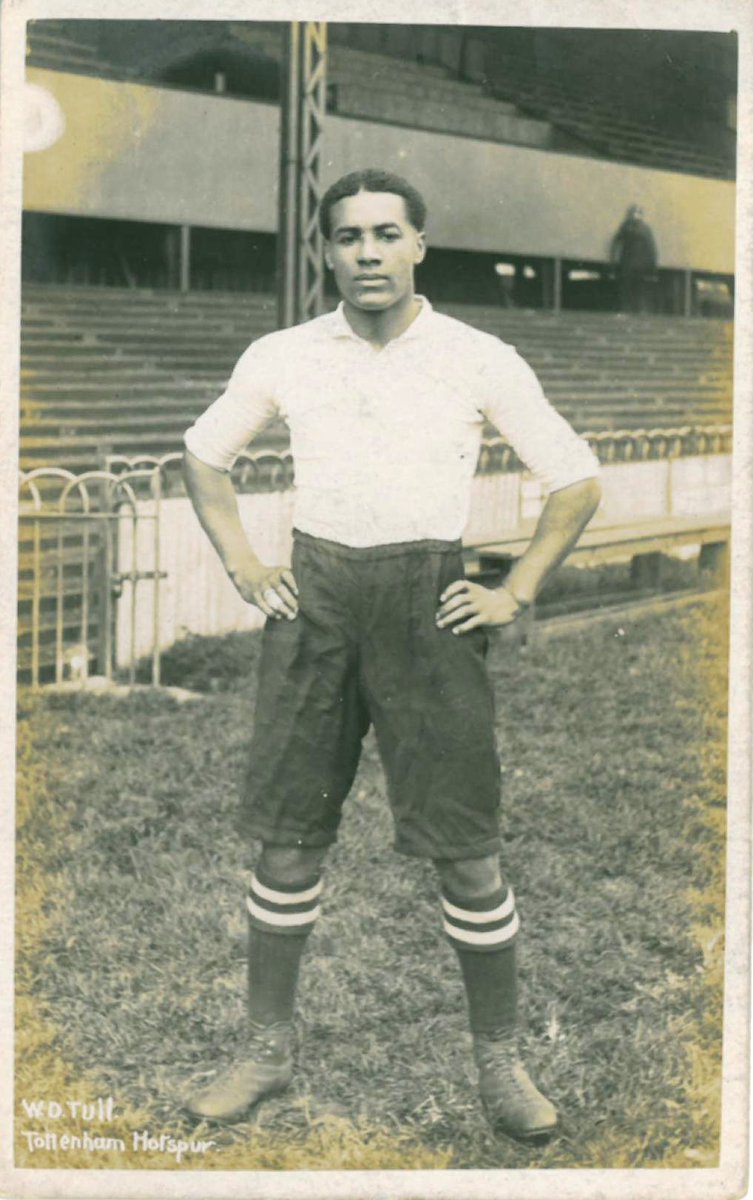